The fight for the Republican nomination for presidency in 1912 was a hard-fought race and in May, made its way through Mansfield.  Theodore Roosevelt, who was president from 1901-1909, was becoming more and more dissatisfied with his successor, whom he initially supported, Ohioan William Howard Taft, and threw his hat in the ring declaring in February 1912 that “The fight is on and I am stripped to the buff.”

Candidates had rarely campaigned like this in prior elections and Taft and Roosevelt had harsh words for one another.  President Taft arrived in Mansfield on May 15, 1912 and appeared at Central Park at 12:45 in the afternoon.  A crowd of 3,000 to 4,000 men, women and children greeted the President according to the Daily Shield, though the Mansfield News reported the number closer to 6,000.  The split between the Republican Party was seen that day in signs with inscriptions like “The Roosevelt boom to date has cost more than the entire presidential campaign of 1908.”  Taft began by speaking to the children who stood before him inquiring: “if I make you a little speech first will you agree to be quiet?” and asking what they would do if someone tried “to overthrow your government and injure your country.”  The children responded with “Beat ‘em! Fight ‘em! Kill ‘em!”

Taft then spoke on Roosevelt saying that the reason he was here campaigning was because “He opposed me and I opposed him.  I opposed him because he had two terms.”  Taft went on to say that if Roosevelt was elected for a third term it would go on to a fourth and fifth and be “dangerous to government.”  According to the Daily Shield, about one-third of the spectators had left by the end of the Taft’s 40 minute speech, after the excitement of seeing the president had worn off.[i]  Again the Mansfield News reported nearly all spectators had stayed until the president finished.

Roosevelt speaking from the Southern Hotel, May 18, 1912 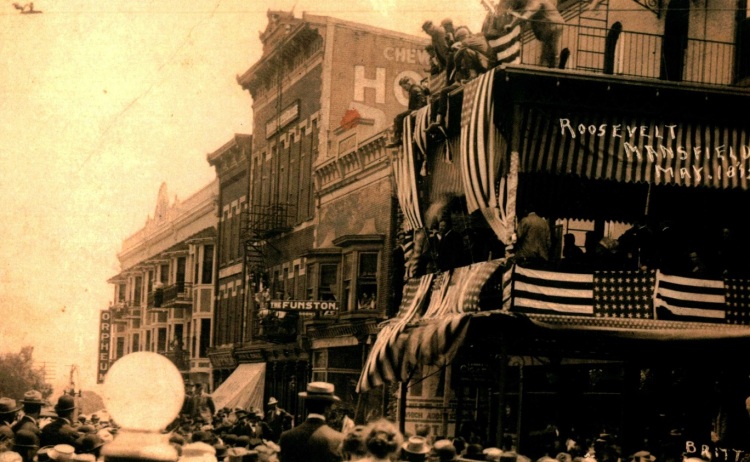 The following Saturday, on May 18, 1912, the former president, Theodore Roosevelt, arrived in Mansfield shortly after 11:00 a. m.  He spoke for a little less than 40 minutes from the veranda of the Southern Hotel, which stood at the southwest corner of Central Park until it was torn down in 1979.  It was estimated that over 6,000 people were there to see the only living ex-president.  Roosevelt began by defending his action in the Brownsville Affair, in which he ordered the dishonorable discharge of 167 soldiers of the African-American 25th Infantry Regiment.  This was after residents of Brownsville, Texas accused members of the regiment of killing a bartender and wounding a police officer.  In the 1970s after a renewed investigation, the government pardoned the men and restored their record to honorable discharge. 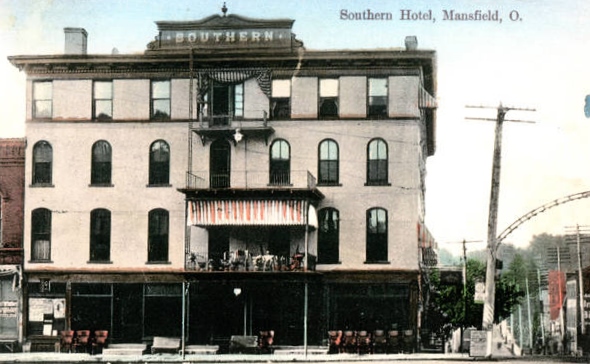 The Southern Hotel around 1910

The Southern Hotel in the 1970s

Roosevelt went on to ask for the support of the wage earner, saying too much of the money a company earns stops in the office and doesn’t get  passed down to the men who labor.  Roosevelt then asked the people to “support us not only for today but for generations to come,” saying “we must shape the form of government now so that those who come after us will live in a land of justice.”  Roosevelt went on to say “we need new laws to face new conditions” and likening the government to the military said “we don’t train soldiers now as they did for the civil war […] don’t rely on old flint lock laws when we need new laws.”  Roosevelt held and informal reception after speaking and shook hands with many on his way to an automobile that took him to a special train headed to Wooster.[ii]

The Harvard at 92 N Main St. used the event in their ad

It was the disunion in the Republican Party that would lead to its downfall and to the election of Woodrow Wilson in 1912.  “Roosevelt won all the Republican primaries against Taft except in Massachusetts. Taft dominated the caucuses that sent delegates to the state conventions. When the voting was done, neither man had the 540 delegates needed to win. Roosevelt had 411, Taft had 367 and minor candidates had 46, leaving 254 up for grabs.[iii]”  The Republican National Committee awarded 235 of those to Taft ensuring his nomination.  Roosevelt was so angered by this that it caused him to leave the Republican Party and start the Progressive Party, also known as the “Bull-Moose” Party, and run as a third party candidate ensuring Wilson’s victory.