Michael D. Harter was born April 6, 1846 in Canton, Ohio to Isaac and Amanda Zenobia Harter.  Michael’s father, Isaac, was a self-made man who came from humble beginnings.  Isaac first arrived in Canton in 1822 when his sister, Mrs. George Dewalt, arranged for him to be indentured to William Christmas, a leading merchant in the city.  Isaac worked for no pay, only board and clothes for 10 years before becoming a partner at the age of 21 and taking over the business in 1836 after Christmas died.  He sold dry goods, groceries, hardware, leather, boots, shoes and hats.

The Harter family contributed much to the banking business in Canton and here in Mansfield.  In 1866, Michael, along with his brother George, and with help from their father, established the banking house George D. Harter & Brother, in Canton, Ohio.  The original building still stands today.  The Aultman’s and Harter’s were two of the biggest banking families in Canton.  Michael’s brother George was married to Cornelius Aultman’s daughter, Elizabeth.   In 1869 Michael was approached by Cornelius Aultman to manage his new company, the Aultman-Taylor Company, in Mansfield, Ohio.   Michael accepted the offer and moved to Mansfield sometime in 1869.  It is also noted in Baughman’s History of Richland County that Michael was involved in the mercantile business with future Mansfield Mayor, Huntington Brown, in 1869.  On March 4, 1869 Michael married Brown’s sister, Mary, in Massillon, Ohio.

Banking was in Harter’s blood and, on February 26, 1873, The Mansfield Savings Bank was organized.  After the erection of its banking house on the corner of Fourth and Main streets, its doors were opened for business on the 15th of October of that year.  Its officers were Barnabas Burns, president; Michael D. Harter, vice president; and R. Brinkerhoff, cashier.   Michael was also treasurer of the Mansfield Mutual Fire Insurance Company, which originated on August 5, 1873; a partner in the banking business, Isaac Harter & Sons in Canton, Ohio; president of Isaac Harter Milling Company in Fostoria, Ohio; and had an interest in a stock company with Gen. R. Brinkerhoff and W. S. McMillen that started The Ohio Liberal newspaper here in Mansfield.

In the 1870 Harter built his home at 381 Park Ave. West, which was built with stone quarried near the future site of the Reformatory.  It was often the scene of social affairs and, after Harter’s death, was used as a residence for a group of businessmen known as The Circle Club.  In 1959 the home was razed and a car wash was put in its place.

On February 27, 1876, Isaac Harter, Michael’s father, died unexpectedly at the age of 64.  Through Isaac’s hard work and dedication, he had become one of Canton’s most respected and successful businessmen.   Michael shared his father’s work ethic and, even though much of his time was taken up through his many business efforts, he still found time to give back to the Mansfield community.  In 1881 he was involved in the incorporation of the Mansfield Normal College with John Sherman, H. C. Hedges and Judge Geddes and, on November 10, 1881, the Soldiers Monument in Central Park was dedicated.  Harter was “the donor of the monument, [and] was received with hearty applause by the assembled thousands and delivered [a] presentation address, appropriate and eloquent both in matter and in style. At the close of his address Mr. Harter formally presented the monument to the patriotic citizens of Richland County. It was then unveiled and viewed with admiration by the people present.”  In addition to this, in 1884, Harter was one of the many people involved in getting The Ohio State Reformatory built in Mansfield.   In 1886 he donated the land on the triangle of Marion Ave. and Park Ave. West, where St. Luke’s Lutheran Church is located. 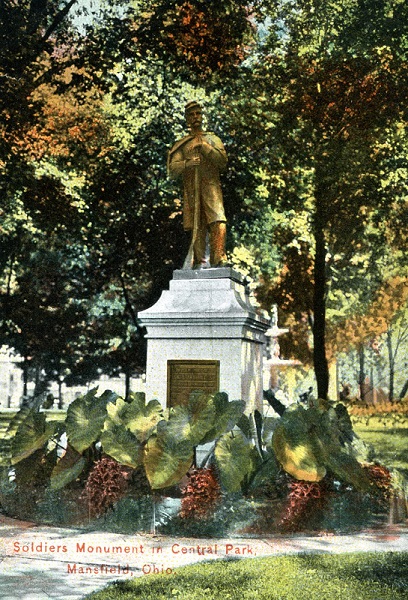 In 1891 with Reid Carpenter, Rush Taggart and S. N. Ford, Harter purchased the Citizens Electric Railway, Light & Power Company, of Mansfield.  This company later built the Shelby Interurban Railway.  It was this same year Harter, a Democrat, began representing Ohio’s 15th district in the U.S. House of Representatives and, in May of 1891, he officially retired from business to dedicate his time to his church, family and his political party.  When asked why he was retiring at the young age of 45, Harter replied:

“I think I am setting an example which I hope will be followed by many other business men; that of retiring upon a reasonable competency and leaving the way open for other men to prosper in the calling they give up.  It is the everlasting greed to make money, rather than to be useful that is fast making of Americans a narrow, selfish, grasping, and I believe unhappy, dissatisfied people.”

During his time in Congress, Harter was in favor of the gold standard.  This would put him at odds with his Mansfield neighbor, Senator John Sherman, and the Silver Purchase Act.  Harter’s views eventually won out when the Silver Purchase Act was repealed after the economic depression, known as The Panic of 1893.  President Cleveland oversaw the repeal to prevent the depletion of the government gold reserves as the Act allowed investors to buy silver, exchanged it at the Treasury for gold dollars, and then sell these gold dollars in the metals market for more than they had paid for the silver.  Many of his colleagues opposed his political views, including many in his own party, and Harter declined another nomination in 1895 and returned to Mansfield.

On February 19, 1896, Michael D. Harter arrived in Fostoria, Ohio to look into his business interest in that city.  He appeared in good health and spirits in the days after his arrival.  He was staying in a house he and Mrs. Harter had furnished for their son, which was in the charge of Mr. and Mrs. S. M. Knapp.  When he retired for bed on the evening of February 21, he told Mrs. Knapp to not call him in the morning if he did not arise for breakfast.  When he did not get up in time for dinner, Mrs. Knapp became uneasy and his room was checked.  A shocking sight greeted those who entered his room.  A report of his death said “Mr. Harter was lying in bed attired in his night robes, with a 32-calibre revolver clinched in his right hand.”  It continued: “there was a bullet wound in his right temple, the bullet having passed through his head; the blood that had oozed from the wound had dried and his lifeless body was already cold.”  He was staying in his son’s room and it was with his son’s revolver that the act was committed.

No evidence was found that Harter had planned suicide.  He had mentioned that he had been unable to fall asleep and this was a known condition he dealt with.  It was reported that on the night he took his life, he had taken three morphine pills to induce sleep, which he had obtained from a druggist in the city.  He had written in a letter to his wife, dated Feb. 20, that he was having trouble sleeping and was afraid to resort to opiates, fearful of what effect they would have on him.  On Feb 23 Harter’s remains arrived back in Mansfield and a funeral was held in his home on Park Ave West, on Feb. 26 at 2:00 pm.  In the week following his death, full pages in the Mansfield Newspapers were dedicated to Harter.  The shock of his death was felt throughout the city and condolences and sympathy poured in from around the country.

One thought on “Michael D. Harter – A Lonely End to a Successful Life”