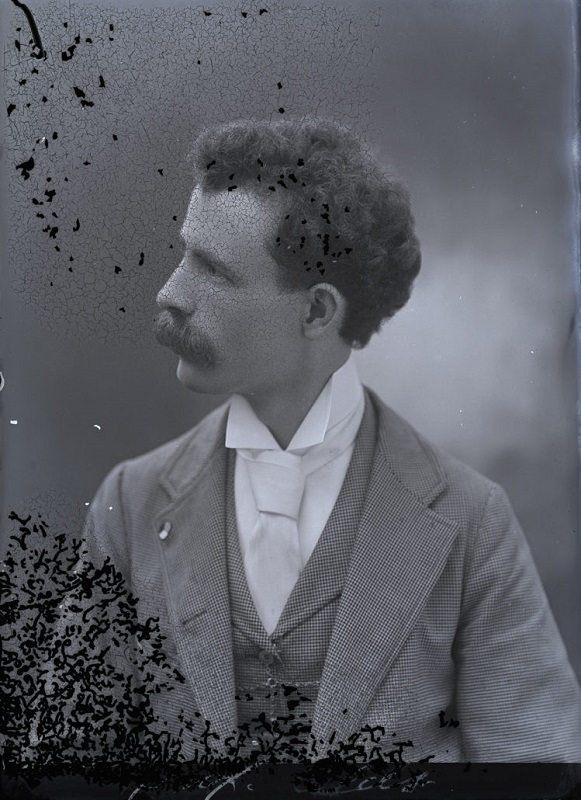 H. G. Olds only spent a short time in Mansfield, but it was the place where he met his wife and one of the last places he stayed for any length of time before departing for South America. Harry Grant Olds was born in Sandusky County, Ohio on November 3, 1868 to Henry Harrison Olds and Georgianna Judd Apthorp. Henry Harrison Olds was a Civil War Veteran, having served as a sergeant in Company B of the 72nd Ohio Volunteer Infantry.  Harry had always been a photographer.  The 1888 and 1890 Sandusky Ohio Directories list him as such and show him living with his family at 934 Washington Street.  In 1895 through 1898 he is listed in the Mansfield, Ohio directories, sleeping at 103 North Main St and later at the Brunswick Hotel.  He is also listed as running, with his partner Arthur Willman, a photography studio called Olds & Willman at 91 ½ North Main St.  It was sometime during his stay in Mansfield he met his future wife Rebecca Jane Rank.

According to a passport application from December 27, 1901, Harry Olds left for Buenos Aires, Argentina on July 3, 1899.  On this journey, while aboard the Buffon, Olds would take 176 snapshots, documenting his trip through each port of call, including Pernambuco, Bahia, Rio de Janeiro, Montevideo, Buenos Aires and the Strait of Magellan.  Upon arriving in Buenos Aires, Olds first worked as a portrait photographer and later opened his own commercial studio.  He is probably best known for his images of Valparaíso, Chili where he captured the poverty in the area at the turn of the century.  His photos showcased working class people and homeless.  Later, from 1901-1916, Olds was the official photographer for the Sociedad Rural Argentina and his work was published in La Ilustración Sudamericana.

Rebecca Jane Rank left Mansfield on April 5, 1902 for South America.  Rebecca recalled that “at that time my parents and sisters thought I was traveling to the end of the world.”  Rebecca and Harry married immediately upon her arrival.  She returned home some 16 times after that first journey where she was one of only two women traveling in first class.  In 1920, Harry and Rebecca Jane were here long enough to show up in the city directory, staying with Minnie Craig, the widow of Dr. James Harvey Craig, and Rebecca’s sister, at 70 West Third St.

Harry Grant Olds died in 1943 in Buenos Aires, Argentina.  His wife stayed there for another 6 years, returning to Mansfield in late 1949.  In an article in the Mansfield News Journal from January 8, 1950, Mrs. Rebecca Olds was still deciding whether to just visit or make Mansfield her permanent home.  City directories show her staying in Mansfield through 1953.  Rebecca Jane Olds died in Palm Beach, Florida in May of 1959.