Mansfield Senior High has had many great athletes in its history.  Wilbur Henry left his mark on the football world 100 years ago.  Wilbur Frank Henry was born on October 31, 1897 to Ulysses Sherman Henry and Bertha Frank.  His father, Ulysses, was born in Lucas, Ohio and was a lifelong resident of the area.  Ulysses worked at the Ohio State Reformatory for 32 years and was once attacked with a hammer by inmate Thomas Wardell.  Wardell was reportedly associated with the Chicago Car Barn Bandits, a group of young men who shocked Chicago in 1903 with their criminal exploits and was a known troublemaker.  Despite this, Wardell was employed as a carpenter at the institution and one day attacked Ulysses as he walked through the carpenter shop. Ulysses survived serious injury and was back to work the next day, only because he was so much larger than his assailant.  Ulysses retired from the Reformatory on January 1, 1938 and died a short time later on January 30, 1938 at the age of 72.  Wilbur’s mother was a German immigrant who came to America as a child.  She died on July 31, 1949.

1912 MHS Football, Henry is second from left in the first row.

Wilbur Henry, or “Pete” or “Fat” as he was referenced in his senior yearbook, got his father’s size and used it to dominate on the field.  He began playing football in the 1912 season as a sophomore.  Only one player returned from the previous year: senior and Captain, Arno Kalmerten, and the young team had a horrendous start to the season being outscored 332-6 in the first 5 games, including an 87-0 loss to Massillon and a 99-6 loss to Akron Central.  Mansfield earned their first win against Marion on November 2, 1912, 13-0 with touchdowns by Henry and junior, Percy Pecht.  The team finished strong winning three out of their last four games.  Henry and eleven others received their letter at the end of the season. 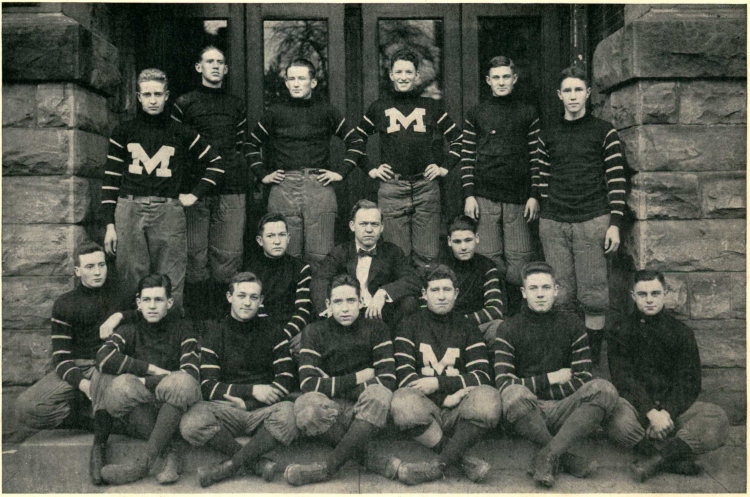 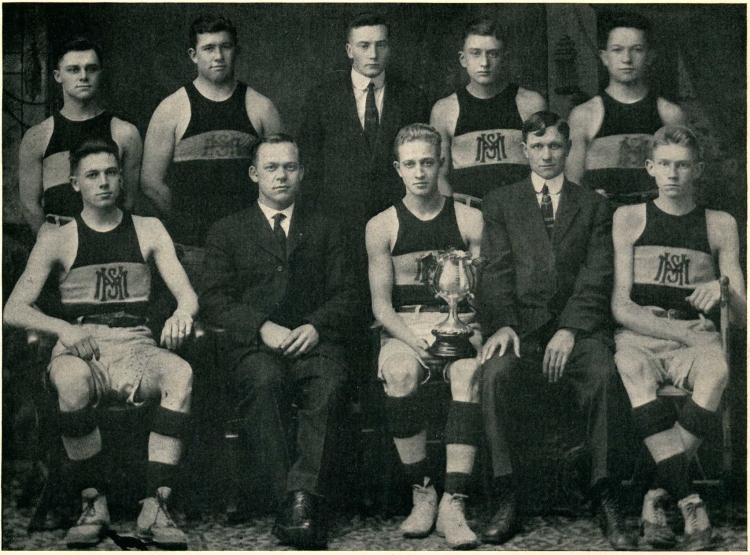 1913-14 MHS Basketball team, Henry is Second from left in back row.

The 1913 season didn’t end much better.  Captain Percy Pecht and the Mansfield eleven only won 2 games, but the defense played well,  with the only exception being an 88-0 loss to Toledo.  Mansfield’s two wins would come against Galion (45-0) and Medina (46-0), unfortunately, these would be some of the only points scored that season.  Mansfield scored a total of 104 points, while their opponents garnered 187.  There was also a new addition to the team: Henry’s classmate, John Tressel.  Tressel would prove to be a companion to Henry for many years.  It was also in Henry’s junior year that he first participated in basketball.  His size once again proved a valuable asset.  With his 190 lbs. frame, he was a “tower of strength on defense and broke up play after play.”  The team won the Championship of Northern Ohio, losing the state championship game against Marietta.

1914 MHS Football, Henry in back row fourth from left. 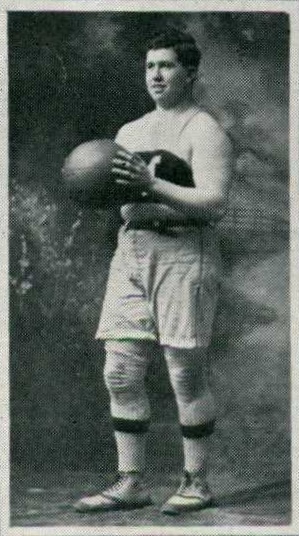 The 1914 football season would be more successful under the new head coach, Harry R. Patton.  Henry was moved to full back under Patton.   The team finished 8-1, their only loss coming from Wooster (9-0).  Wilbur Henry led the team as captain and the defense only allowed 30 points in nine games played, 8 of them played at home, the only away game hosted by Bucyrus.  Henry must have been quite a site stepping onto the field, weighing well over 200 lbs. his senior year when others on the field averaged around 150 lbs.  At the finish of the season, players were given a solid gold pin instead of the traditional sweater with an “M” on it.

In October of 1915, it was announced that Wilbur Henry and his teammate, John Tressel, had made the football team at Washington and Jefferson College in Washington, Pa.  The successful football program was started in 1890 and had a winning season every year except 1910.  In the three seasons before Henry and Tressel’s arrival, the team had gone 28-4 under Coach Bob Folwell.  Henry played and lettered his freshmen year, but was forced to leave school after contracting scarlet fever.  Folwell’s last year at Washington and Jefferson was in 1915, going 8-1-1, and it was rumored that Henry would follow him to the University of Pennsylvania.  Henry and Tressel returned to Washington and Jefferson for the 1916 season putting those rumors to rest.  The team would go 8-2 under new coach Sol Metzger.  1917 brought more success when Henry was elected captain and was named an All-American.  The 1918 season was cut short because of World War I.  Washington and Jefferson only played 4 games, going 2-2.  Henry only played in two of these.  Despite this, however, both Henry and Tressel won All-American honors.

1918 would be Tressel’s final college season.  He and Henry would team up to coach and prepare the team from the Mansfield Sheet and Tin Plate Company before Tressel left to play his only season of professional football for the Massillon Tigers and Henry returned to Washington and Jefferson for his senior year.  Henry’s eligibility was in question for the 1919 season, but colleges agreed to grant students a fifth year due to the shortened season and the Student Army Training Corps requirements, in which all able-bodied men were required to participate.  The University of Pittsburgh was not happy with Henry’s eligibility, even though they played other teams with fifth-year seniors and Henry agreed to sit out the game.  Pitt won the contest 7-6.  Henry would once again be named an All-American.

Wilbur “Pete” Henry would go on to play nine seasons of professional football with the Canton Bulldogs, New York Giants and Pottsville Maroons between 1920 and 1928.  He also served as coach of the Canton Bulldogs in 1926 and the Pottsville Maroons in 1928.  After retiring from his professional career, Henry returned to his alma mater and served as the freshman coach of the football team and head coach of the basketball and track teams.  He served as head coach of the football team in 1942 and 1945 and was the athletic director from 1932 until his death in 1952.  Henry was only 54 at the time of his death which was caused by sepsis due to gangrene in his left foot.  In 1949, his right leg was amputated due to the same ailment.  He was returned to Mansfield for burial and today the gym at Mansfield Senior High School is named in his honor.