The first time John Sherman met Abraham Lincoln was on February 23, 1861, the day the President-elect arrived in Washington D. C.  He arrived in disguise with his valet and bodyguard William H. Johnson after evading a suspected assassination in Baltimore.  Sherman wrote of meeting Lincoln and his wife in his autobiography.  The event happened at Willard’s Hotel, where Sheman was then staying.  When he was introduced, Lincoln took both of Sherman’s hands and said, “You are John Sherman!  Well, I am taller than you; let’s measure.”  They then stood back to back and someone announced that Lincoln was two inches taller.  Sherman said their conversation was cheerful and that a “congratulations for his escape from Baltimore ‘roughs’ was received with a laugh.” 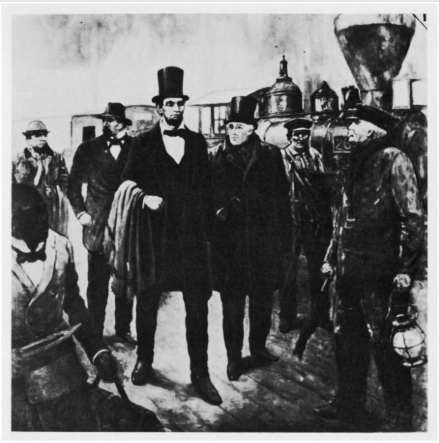 Both of these men would later be immortalized by American Sculptor, Daniel Chester French.  The statue of Lincoln, in the Lincoln Memorial, would become much more famous and is still one of the top tourist attractions in Washington D. C. today.  Sherman inquired about a bust in 1886 while Senator.  In a letter received by Sherman dated May 12, 1886, from French, French indicated the price for a marble bust sculpture was $1000 and that he would soon be in Washington D. C. to finish a bust of former Vice President Henry Wilson and that he could stay and begin Sherman’s if he desired.

French was born April 20, 1850, to Anne Richardson and Henry Flagg French.  In 1867 the family moved to Concord, Massachusetts where French became friends with Ralph Waldo Emerson and decided to pursue sculpting under the influence of Lousia May Alcott’s sister, May.  Though he is most famous for his Lincoln design, he also is credited with many other monuments and sculptures. This includes the Justice statue, which adorns the pediment of the Appellate Division Courthouse of New York State in Manhattan and the bronze doors of the Boston Public Library.

from The Smithsonian Institution – The National Gallery of Art catalog (1922), p 66

John Sherman’s home was razed not long after his death on October 22, 1900, it stood for only four more years.  There were those who wished to save the property and others for various reasons, either financial or they were not a fan of the former senator, who hoped the property would be demolished.  The two articles below from the Mansfield Daily Shield show these two points of view in 1904.  Eventually, the home was razed and lots were sold.  The full page ad from the Mansfield News describes the 71 lots made from the Sherman property. 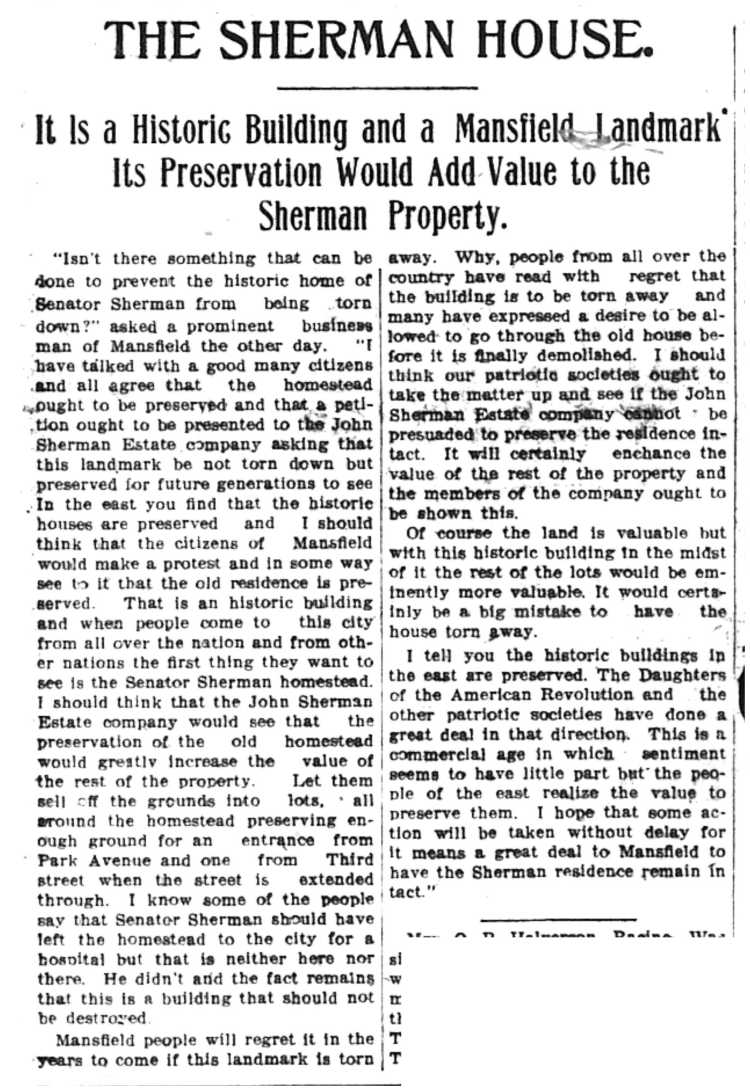 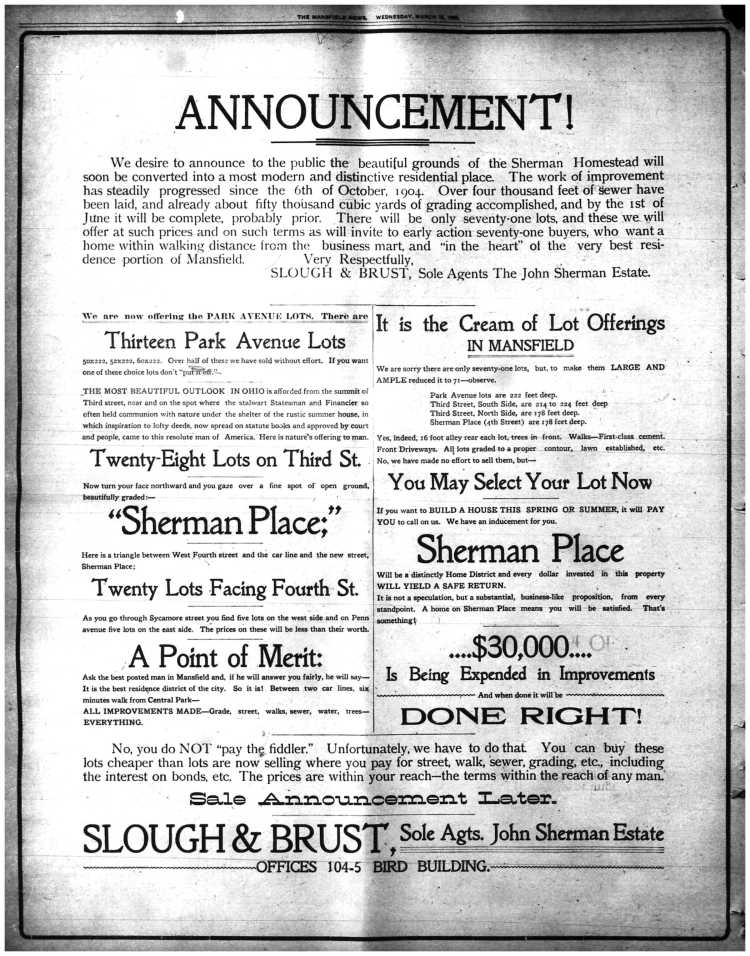 Earlier we looked at John Sherman’s oldest brother Charles and his impact in Mansfield.  In this post, we will take a closer look at one of his other 10 siblings, Hoyt Sherman.  While not making an impact in Mansfield, Hoyt was another successful member, and lawyer, of the prolific Sherman family.  Hoyt was born November 21, 1827 in Lancaster, Ohio and was the youngest son in the Sherman family.  Up until the age of 18, he focused on school and worked in a printing office.  In 1848 Hoyt made his way to Des Moines, Iowa.  A year later he passed the bar and on June 26, 1849, was appointed postmaster.  With his own funds, he built a frame building on West Second and Vine Streets, which was used exclusively as a post office.[1]  In addition to this, he built the first bank, served on the town council and was involved in local and state politics.  In 1855, Hoyt married Miss Sara Moulton of Ohio and had five children, Frank, Adaline, Charles, Arthur and Helen.  When the Civil War started, President Lincoln appointed Hoyt Army paymaster with the rank of Major and he held that position for three years.  After the War, Major Sherman was a member of the House of the Eleventh General Assembly, was chairman of the committee on railroads, and a member of the committee of ways and means.  Hoyt was in Mansfield at least once in 1885, when he was present at the Sherman Family Reunion held at John Sherman’s residence, along with brother William Tecumseh.  In 1886 he was one of the founders of the Pioneers Lawmakers’ Association and for many years executive officer of the Associated Charities of Des Moines.[2]  In addition to all this, he gave his counsel, time and money to ensure Des Moines had schools, a college, a waterworks and more.[3]  Hoyt Sherman died on January 25, 1904 at the age of 77, the last of the children of Charles Robert and Mary Hoyt Sherman.

Unlike John Sherman’s home in Mansfield, Hoyt Sherman’s residence is still standing.  It is known today as Hoyt Sherman Place and includes an art gallery and historic theater, which was completed in 1923.  The home was built in 1877 by Hoyt and sat empty after his death until 1907 when members of The Des Moines Women’s Club began using it.  Guest speakers included individuals like Helen Keller and Amelia Earhart.  Today it is used for concerts, art exhibits, weddings and business affairs.

John Sherman wasn’t the only Sherman to make an impact on Mansfield, Ohio.  His brother, Charles Taylor Sherman, was already an established attorney in the city when John arrived in Mansfield in 1840.  Charles was the oldest child born to Judge Charles Robert Sherman and Mary Hoyt Sherman.  According to multiple biographies, Charles was born in Norwalk, Connecticut on February 3, 1811 and brought to Lancaster, Ohio about a year later.  Charles began attending Ohio University in Athens around 1829, and graduated in 1833 according to the Annual Catalog of Students from 1861-62.  He studied law in Dayton, Ohio under his cousin Henry Stoddard before moving to Mansfield around 1835.

Charles was a well-respected citizen of Mansfield and in his obituary it says “few men had a wider knowledge of the prominent lawyers of the State, or knew so well thoroughly the history of Ohio.  A gentleman who had resided on Ohio for nearly fifty years, and whose scholarship and intelligence were of high order, said that Mr. Sherman had a more extensive and precise knowledge of the early families and history of the State than any man of his acquaintance not even excepting the great Thomas Ewing himself.”  Ewing was a family friend, attorney and Senator from Ohio and William T. Sherman lived with Ewing after his father’s death.  Not only was he well-respected publicly, but his family also though fondly of him.  His brothers, General W. T. Sherman and Hon. John Sherman, spoke “in the warmest and highest terms of the sound sense, unwearied kindness, good temper and noble exertions shown by their elder brother“ in the days after their father’s death.

Though outshined by his famous brothers, Charles did much to improve Mansfield; the biggest contribution was his involvement in bringing the railroad through Mansfield.  Charles contributed money, labor and personal influence to the location and building of the Sandusky, Mansfield and Newark Railroad and the Pittsburgh, Fort Wayne and Chicago Railroad, later becoming director of both organizations.  When the Civil War broke out, Charles T. Sherman organized and was chairman of the military committee in Richland County.  He would later be appointed military commandant of a camp in Mansfield and, after the war, he was appointed by President Lincoln to settle war claims in St.  Louis.

His final public service appointment was of U.S. District Judge of Northern Ohio.  He was appointed by President Johnson to succeed Judge Hiram V. Wilson.  Charles held this position from March of 1867 to November of 1872 when he resigned.  During Judge Sherman’s time in Mansfield, he was also involved in the organization of the agricultural society and for the introduction of better modes of farming, which created larger production and a better quality of fruits.

On January 1, 1879, Charles Taylor Sherman died in his home on Prospect St.  According to his obituary, he retired normally the night before and awoke around 1 o’clock on the morning complaining of a cough and chest pains.  He got no relief from medicine and passed away without a struggle after a few moments difficulty in breathing.