Barnard Wolff was born on April 17, 1827 in Chambersburg, Pennsylvania and arrived in Mansfield, Ohio, with his wife, around 1850.  Barnard became a prominent architect, carpenter, and builder after he arrived in Mansfield and built such buildings as the Baptist Church, which stood on the corner of Park Ave West and Walnut streets; the Fire Hall; the Union Depot; and the Boston store block.[1]  One of his most notable buildings, at the corner of East Fourth and North Diamond streets, bore his name for its first five years of existence, the Barnard House.  This would later be known as the Sherman House and finally The Brunswick, or Brunswick Hotel.

In April of 1870, the Barnard House opened under the management of John Ditwiler.[2]  The Mansfield Herald reported that Barnard Wolff had spared no expense in the building, making it one of the finest in the city and possibly finer than what stood in many other towns west of Mansfield.  They added that Mr. Wolff should get much praise for the improvements he had made to Fourth Street and for the business which would be drawn downtown.  In January of 1875, Shuman Keister leased the hotel and quickly changed the name to the Sherman House.[3]  The name stayed the Sherman House, or Hotel Sherman until around 1896 when it was named The Brunswick.

The Interior of The Brunswick around 1909.

The hotel had various managers in the 1880s and 1890s, until 1896 when Joel G. Knittle took over.  Knittle remained at The Brunswick until September of 1911 when Barnard Wolff’s son, Fred B. Wolff, took over management with his new wife, Grace Leppo Wolff, upon their return from their honeymoon.  Knittle would die that same month of cancer.  Fred Wolff would serve as service-safety director under two mayors in Mansfield and run the hotel until his death on April 13, 1954.  After his death, his wife, Grace, continued to manage the hotel.

The Brunswick in 1964, shortly before being razed. (Photo by Eileen Wolford)

Grace would run the hotel until her death a few years later on April 22, 1961.  Mansfield Midtown Inc., a local for-profit company who aimed to create more accessible parking downtown, had been wanting to purchase the hotel since before Grace’s death in 1961.  In 1964 they finally acquired the building and it was razed a short time later.  The location is now part of the free downtown parking lot, across the street from the Richland Carrousel Park.

John McSherry came to the United States in 1850.  An Irish immigrant, he was born in County Leitrim, Ireland on November 29, 1813.[1]  He first settled in Sandusky, Ohio and later that same year moved to Mansfield, where he would spend the rest of his life.  McSherry first worked in the coal business when he arrived and, by the 1860s, was running a saloon at the Atlantic and Great Western Railroad passenger depot.  On August 20, 1855, John McSherry married Margaret Ann Patterson in Richland County, Ohio.[2] The couple had two daughters: Anna Amanda, born in 1860,[3] and Minnie, born in 1864.[4] McSherry worked hard, saved his money, and invested in property.  When a disastrous fire destroyed the Pacific Hotel and some of McSherry’s buildings located nearby on December 22, 1872,[5] McSherry saw an opportunity to build his own hotel.

The Pacific Hotel, owned by Lewis Hanawalt, was completely destroyed.  An article in the Mansfield Herald on June 26, 1873, stated that “the new hotel of Mr. John McSherry on the site of the Pacific House, recently burned, is under roof and being pushed rapidly to completion.”  The hotel would be called the Tremont House.  On June 21, 1877, Anna Amanda McSherry married James J. Hartley.[6]  After their marriage, James Hartley became the manager of the Tremont House and helped to make many improvements.  In 1881 it was reported they spent $4000 redecorating and repainting the hotel.  Included in this was a large plate glass window, which was installed on the south side of the building.  The hotel was said to be one of the finest in this part of the country and had one of the best restaurants in town.

On December 6, 1881, John McSherry died of Typhoid Fever.  Though he was a saloon and hotel owner in his time, McSherry was a strict temperance man for the last 15 years of his life and a member of the Christian Temperance Union.  He was a member of St. Peter’s Church and was buried in the Catholic Cemetery.[7]  After his death, his son-in-law briefly took over ownership of the hotel.  The Tremont didn’t stay in the family long, however, and on October 28, 1882, it was reported that Elisha A. Leech had purchased the hotel for $18,000.  Around 1889 Hartley and wife Anna, along with her sister, Minnie and her husband William A. Bard, moved to Indiana.  The McSherry daughter’s lives were cut short after leaving Mansfield.  About a year later, on April 9, 1890, Minnie at age 26 died in childbirth.  The child Samuel J. was stillborn.  Anna would die a few years later on August 10, 1896, from cancer.[8]

Leech put another $12,000 into the hotel during his life.  Leech worked tirelessly to become a respected businessman in Mansfield.  His family first arrived in the city in 1849 when he was 9 years old.  As a young boy, he worked on a farm in Buda, Illinois before being compelled to enter the service when the Civil War broke out.  Leech was discharged for disability and spent time in Chicago working as a baggage master before returning to Mansfield and learning the trades of stonemason and plasterer.  In 1879, Leech purchased the Atlantic House, later the Carlton Hotel.  Three years later, Leech purchased the Tremont and ran it until his death on December 23, 1902.[9]

After Leech’s death, his wife, Margaret, and adopted daughter, W. Sherman Bell, ran the hotel until 1917.  Ohio Brass had purchased the building with plans to build a new office building on the site.[10]  The hotel stayed and Ohio Brass used it as a lunchroom and dining hall for employees.  On July 3, 1933, the Tremont house gave way to progress and was razed.  On that day the Mansfield News Journal wrote: “walls that once looked down on regular Sunday patrons that frequently caught the talk of political potentates, business magnates, and socialites who debarked from the trains long enough to dine at the famous Tremont House, today lay in ruins because they constituted a hazard in their useless old age.”

For more than 200, years the Wiler name has been associated with a building on the corner of North Main Street and Dickson Ave in Mansfield, Ohio.  Swiss immigrant John Jacob Wiler arrived in Mansfield in 1819 and quickly married Margaret Styers on April 25, 1819, who was the daughter of the man he was renting from.  The Wiler Tavern or, Wiler House, was born that year.  Wiler started as a baker and brewer and later an innkeeper.  According to Graham’s History of Richland County, Ohio, Wiler first built a two-story brick building in 1831 on the property he officially acquired from his father-in-law in 1821.  Two more stories were added around 1840.  The earliest image of the Wiler House comes from the 1869-70 Mansfield City directory shown below.

On May 31, 1875, a fire started in the roof of the Wiler House.  The building was renovated and at some point, the roof was changed from the flat roof depicted in the illustration above to the sloped roof in the photo below.  A change in the color of brick is clearly visible above the third-story showing the new fourth floor and roof.  Also visible in the photograph is the change in color of brick showing the 1840 two-story addition.

John Jacob Wiler died on August 1, 1881 at the age of 101.  The property was handed down to his daughter Mary (Wiler) Cook and she sold part of the Wiler Block to Sharpless E. Bird in 1895.  A portion of the Wiler House would be torn down and Sharpless would construct the Bird Building the following year. The following photos show the Bird Building and what remained of The Wiler, as it was then called, after renovation.

On October 9, 1911, an explosion rocked the Wiler Building.  Natural Gas had accumulated in the basement and was set off by a pilot light in a gas furnace located in the center of the Risch & McCoy storeroom.  There were about 14 workers and some customers in the building at the time of the explosion. Miss Lydia Brumenschenkel would die four weeks later as a result of the injuries she sustained. It was quite a spectacle and many souvenir postcards were sold showing smoke rising from The Wiler.

The Wiler was repaired and stood at that location until May of 1927 when it was razed and a new $40,000 Wiler Building was constructed in its place.

Today the Wiler Building is home to the Katana Fitness Center at 67 North Main St.

Legend has it that the first Christmas tree in the city of Mansfield was put up by German immigrant Peter Ott in the family parlor of the Wiler House.  The story varies slightly depending on which article you read.  According to Virgil Stanfield, the tree was put up for Christmas 1855 for the invalid son of the Wiler House operator, James Hervey Cook.  Ott had a barbershop for some time in the Wiler house.  According to Stanfield, Ott made his way into the woods and chopped down a “good-sized pine.”  He added ornaments, which he ordered from Germany, and candles.  The tree was a delight not only to the Cook boy, but all of Mansfield.[i]  The boy is not mentioned by name in the article, but a 5-year-old child named Albert Cook is listed on the 1850 U.S. Census.  He is not listed on the 1860 Census and no further information was found on him.

A shorter story from 1907 in the Mansfield Daily Shield describes the story differently.  The tree was put up Christmas Eve 1854, a year earlier, and an informal social party was held.  There is no mention of the Cook boy and it was reported Ott purchased the ornaments a few weeks earlier in New York.   Both Peter Ott and James Hervey Cook’s widow, Mary Wiler, were living at the time of this article. 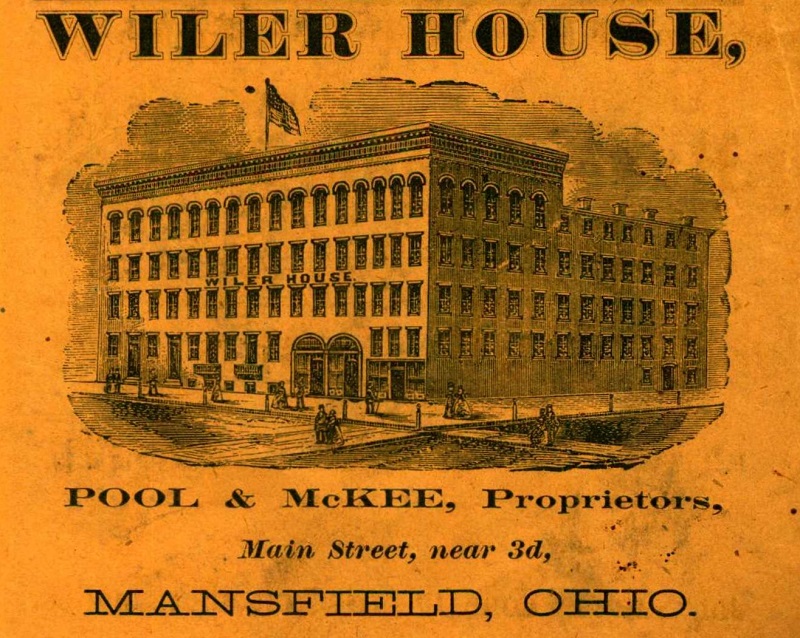 Peter Ott was born in Plankstadt, Germany on December 14, 1834 and arrived in America in February of 1851, according to a later passport application.[ii]  According to Stanfield, he first practiced his trade as a barber in Milan, Ohio where he recalled cutting Thomas Edison’s hair, which, if true, Edison would have been 4 years old at the time.  Ott arrived in Mansfield a few years later, in 1853, and set up shop in the Wiler House.  On January 28, 1858, Peter married Fredericka Bleily in Crawford County.[iii]  According to Census records, the couple had at least 6 children and Peter is the grandfather of Mansfield business and civic leader Louis J. Ott, who married Miss Helen S. Keeting, the Mansfield Public Library’s first children’s librarian.

Peter had different jobs throughout his time in Mansfield.  After being a barber, he was an insurance agent, involved for many years in the manufacturing and sale of vinegar and cider, and a florist for the B&O Railroad.  Peter Ott was a city councilman and dedicated to the beatification of Central Park.  He was responsible for the removal of the fence around the park and the collection of money for the construction of the bandstand, even writing to the Hon. John Sherman to request, not money, but a flag for the bandstand.  Sherman replied sending the best quality flag available from Washington D.C.[iv] 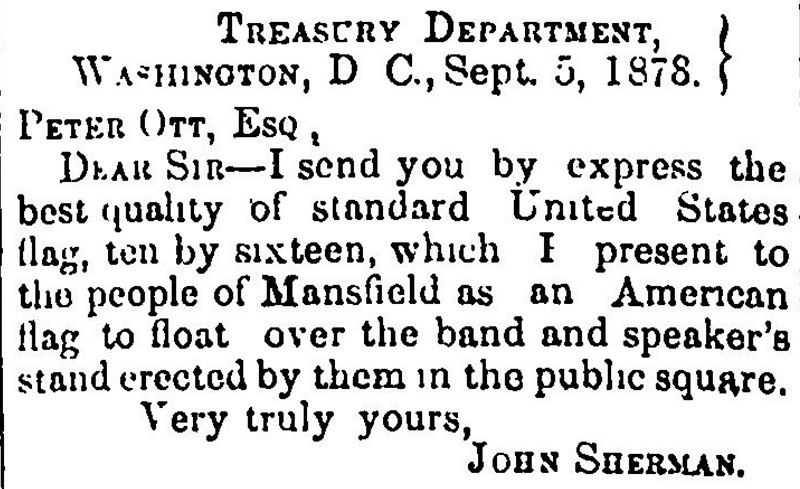 Peter Ott died on June 11, 1911.  In his obituary he is remembered as one of Mansfield’s most highly honored and respected men and a man of the highest integrity.[v]