On October 27, 1896 the Mitchell Chapel African Methodist Episcopal (A.M.E.) Church was dedicated on Glessner Ave., but the church’s history goes back many years before this.  The earliest records of the church in Mansfield, Ohio were said to be in the possession of the late Alice Poindexter Cole, but no minutes were kept.  The church met briefly on Diamond Street and the earliest members were: Ada Beaumont, Flora Davis, Mary Dunmore, Mr. and Mrs. James Edmunds, Julia Evans, Liggin Jones, John Liggins and Mariah and Thomas Wilson.  It is also rumored that the group “met in the old Presbyterian church and later in a tinning shop owned by Mr. Runyon” before moving to Glessner Ave, which was then Pine St.

An early history taken from A. A. Graham’s History of Richland County, Ohio published in 1880:

The African Methodist Episcopal Church is located on East Diamond Street. It is not at present owned by the congregation, which is small, numbering only about twenty members.  It was organized at that place in 1875, the principal members being George Conley, Philip Harris, Judge Sheffield, William Steward and Mrs. Rachel Steward and Mrs. Isaac Pleasants.  The ministers have been Rev. Armhouse, Neely Jackson, William Mackedew, N. L. Bray and J. W. Jackson. The Sunday school connected with this church was organized by Mr. L. J. Bonar, in 1865, in the basement of the Presbyterian Church. Mr. Bonar was Superintendent for several years. After him Mr. Isaac Pleasants has occupied that position acceptably. The membership is about thirty-one.”

While the parishioners were on Diamond Street, it was decided that a larger and better suited building was needed, and a group was put together to search for a proper location.  A building was found on Pine Street, now Glessner Ave., and, after discovering the building owner was George F. Carpenter, a group went to meet with him.  He allowed them use of the building free of charge.  Later a church was erected and the land was deeded over to H. E. Bell, the attorney and trustee of the church estate.

In November of 1948, Rev. F. D. Barnes became the 31st minister to serve the congregation.  It was determined that the original building was beyond repair and a decision was made that it be razed in 1950.  That same year, construction of a new building began.  The second building was dedicated on September 23, 1951 and the congregation stayed at this location at 151 Glessner Ave. for almost 50 years before moving to their current location at 182 South Adams St. 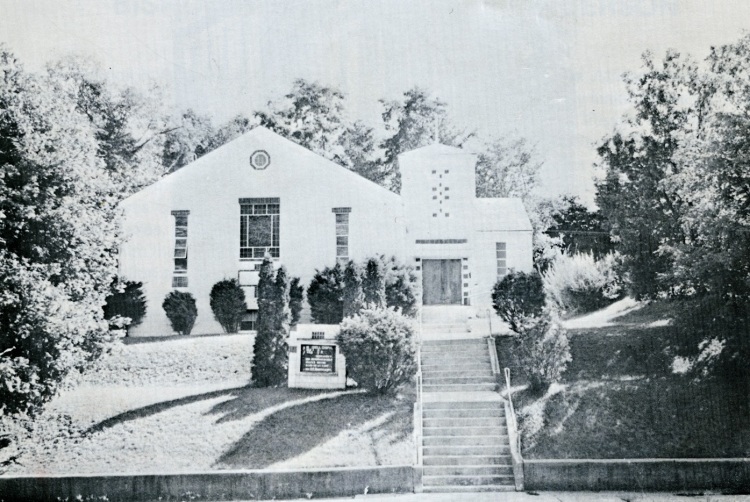 The early history of the African Methodist Episcopal Church from the church’s website:

The AMEC grew out of the Free African Society (FAS) which Richard Allen, Absalom Jones, and others established in Philadelphia in 1787. When officials at St. George’s MEC pulled blacks off their knees while praying, FAS members discovered just how far American Methodists would go to enforce racial discrimination against African Americans. Hence, these members of St. George’s made plans to transform their mutual aid society into an African congregation. Although most wanted to affiliate with the Protestant Episcopal Church, Allen led a small group who resolved to remain Methodists. In 1794 Bethel AME was dedicated with Allen as pastor. To establish Bethel’s independence from interfering white Methodists, Allen, a former Delaware slave, successfully sued in the Pennsylvania courts in 1807 and 1815 for the right of his congregation to exist as an independent institution. Because black Methodists in other middle Atlantic communities encountered racism and desired religious autonomy, Allen called them to meet in Philadelphia to form a new Wesleyan denomination, the AME.”