James Sherman was born on December 14, 1813,[1] or December 12, 1814,[2] depending on which source you look at.  His parents were Charles Robert Sherman, a respected lawyer in Lancaster, Ohio, and Justice of the Ohio Supreme Court and Mary Hoyt Sherman.  James lost his father at an early age after Charles’s sudden death on June 24, 1829.[3]   It’s possible James never truly recovered from the loss of his father during his adolescent years.  Unlike his brothers, Mansfield, Ohio lawyer Charles T. Sherman; Civil War General William T. Sherman; Senator John Sherman; newspaperman and Mayor of Des Moines, Iowa Lampson P. Sherman; and Army paymaster and politician Maj. Hoyt Sherman, James never rose to greatness.

In John Sherman’s autobiography, he says James left for Cincinnati after their father’s death and “accepted a clerkship in a store,” and “from that time paid his own way.”[4]  James is not mentioned again, but letters between John and William T. Sherman strongly indicated John did not agree with the life James was leading.  On September 26, 1841, James married Sophia Connell in Lancaster, Fairfield County, Ohio and a few years later, after declining an offer from his brother Charles to come to Mansfield, James went west to the new settlement in Fort Des Moines.  He returned to Ohio in 1847, procured $1,000 to start a grocery store, and left again for Iowa.  His wife, Sophia, and oldest son, Charles, joined him a few months later.  The 1850 Census lists James as having no occupation in Fort Des Moines, indicating the grocery store had failed and he had added another child, Frances.  His brothers, Hoyt and Lampson, were also living with him.  In letters between Hoyt and William, Hoyt says there are troubles between Sophia and James and that she is considering returning to Ohio.  By 1851 Hoyt writes: “Jim still drinks – does nothing.”[5] 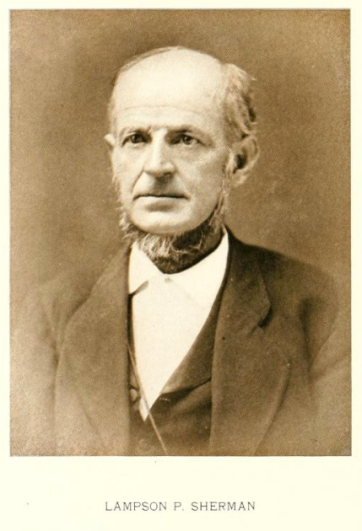 William is able to patch up the marriage between James and Sophia, but both he and John express their concerns and say that if James’s drinking does not stop, Sophia will have no alternative.  John was finished with his brother, calling him a “miserable drunkard,” and saying he was “lost to all sense of honor.”[6]  James and Sophia never divorced and had two more children: Hoyt, in 1851, and Mary, in 1855, who only lived a few months.  James made small profits by buying and selling land in Iowa.  Most notably an area called Sevastopol, Iowa was laid out by James and recorded on July 21, 1862.  It was incorporated after his death.  It was said to be named after a well-known Russian Fortress during the Crimean War.[7]

From The Illustrated Historical Atlas of Iowa, 1875, A.T. Andreas.

James got into further financial problems and, in 1863, he quitclaimed the family homestead to Sophia for $200, most likely a tactic to put the property beyond the reach of his creditors.  Later that year, John Sherman made one last attempt to help his brother and arranged for James to move to Cincinnati, while Sophia and his children stayed in Des Moines.  It was hoped a brother-in-law there would be able to keep a watch over him.  James got a job in a tent factory, making war materials, but was never able to kick his habit.  On July 10, 1864, James Sherman died in Cincinnati, Ohio due to the effects of alcoholism.  His wife, Sophia, continued to live on in the family homestead, selling the property James had accumulated throughout the years to raise money.  She died on September 9, 1871, in Des Moines, Iowa.[8]